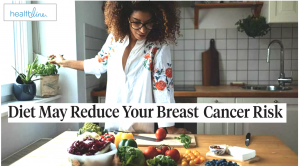 HealthLine – Like your gut, the breast has a microbiome, and a new study shows it can be directly influenced by what you eat.

And, like the gut microbiome, it can be affected by diet, according to researchers at Wake Forest School of Medicine in North Carolina.

“Microbiome” refers to a variety of living organisms, such as bacteria and fungi, that populate our bodies. This ecosystem is essential to good health.

“We were surprised that diet directly influenced microbiome outside of the intestinal tract in sites such as the mammary gland,” the study’s lead author, Katherine Cook, PhD, said in a press release.

“Diet may reduce the risk of developing breast cancer”

The researchers say that shifting the breast microbiome through diet may reduce the risk of developing breast cancer.

The scientists used female monkeys to see how diet affects breast tissue. They fed one group a high-fat Western diet and another group a Mediterranean diet, which is plant based.

After 2 1/2 years, which is about the same as 8 years for humans, the two groups had significant differences in bacteria in their breast tissue.

The Mediterranean diet group had 10 times more mammary gland Lactobacillus. These bacteria have been shown to slow growth in breast tumors.

The Mediterranean diet group also had more bile acid metabolites, which the researchers say may reduce the risk of breast cancer.

Study authors acknowledge the research is still in the early stages.

Because microbiomes vary according to where a person lives, they say future studies will involve primates from different regions.

Other studies are also underway to see if fish oil or probiotic supplements can affect microbiomes in mammary glands.